1872 – Novelty Iron and Brass Foundry is started sometime between 1870 and 1872.  1872 is the first time it is found listed in the local business directory.  J.B. Hazen and E.H. Morgan are the proprietors. At this time, the business operates out of two small brick buildings and has about 10 employees.

1874 – The business is now referred to as Hazen and Morgan Bros. It appears that J.B.  Hazen has left the company. This year, the original buildings are razed and a new factory, consisting of a machine shop, foundry, engine room, and offices, is built on the site.

1875 -The company now goes by the name Novelty Iron Works.  It manufactures cast iron products including pumps, windmills, iron pavements, store fronts, and agricultural products such as feed grinders.  It is still at the same location.

1884 – The Novelty Iron Works is no longer in business. The New Union Manufacturing Company is founded this year by E.H. Morgan, Charles Morgan, and Cyrus Tobias.  The company exclusively manufactures coffee and spice mills.

1885 –The Arcade Manufacturing Company is incorporated on October 20, 1885. A month earlier, Al Baumgarten purchased the patent for a new cork puller, invented by the Morgan brothers. This cork puller becomes the company’s first product. Officers for the new company are: Al Baumgarten, President, Cyrus Tobias, Secretary, EH Morgan, Vice President. The name for the new company may quite possibly have come from Al Baumgarten, who for several years prior to partnering with the Morgans, operated a saloon and pool hall called “The Arcade.” The company’s product line soon expands to include coffee mills and other small hardware items.

1893 – Between 1885 and 1893 the location of the Arcade factory moves around to several Freeport Locations. In February of 1893, Arcade officials build a large factory at the new location, and would remain here until the plant closes in the 1950’s.  Al Baumgartner is president, E.H. Morgan vice president and secretary, and Charles Morgan treasurer and superintendent.  The company needs more capital in order to grow, and in December of 1893, L.L. Munn invests a large amount of money in the company, and takes over the position of president.  His son, LL Munn, Jr. also joins the company at this time.

1894-1900 – During these years coffee mills and hardware specialties are still Arcade’s main products. A small line of toys, created mainly for the purpose of using up manufacturing scraps,  starts in production sometime after 1895.

Early 1900s – Arcade invents and patents many of the items it manufactures.  As the company grows, it sees the need to modernize its production.  Molding machines are developed to make the casting of products faster and more efficient.  These machines are so important to the growth of this industry, that sometime in the early 1900s, Arcade starts manufacturing these machines for other companies and sells them world-wide.  This line of molding machines and foundry equipment continues to be a very important part of the Arcade Company, even after it is sold to Rockwell in the 1940’s.

1918 – L.L. Munn’s son-in-law,  Isaac Gassman, leaves his law practice in Freeport to take on the role of secretary and sales manager for the Arcade Company. Up to this point, toys remained a very small part of Arcade’s business.

1921 – Under the direction of IP Gassman, Arcade starts focusing on developing their toy line.  Big changes for the company come when the Yellow Cab is introduced.

1922 – The company begins an advertising campaign in national magazines this year.  Around this time it also places a large billboard on the highway outside of Freeport inviting visitors to stop for a tour of the plant. The company also sets up permanent showrooms in Chicago and New York.

1927 – The company holds a huge party to celebrate the opening of a new foundry building.  Approximately 600 invitations are sent, including to all 450 Arcade employees. Everyone leaves with a special souvenir- a cast brass paperweight embossed with a sketch of the new foundry.

1930 – After the deaths of the Morgan brothers (Charles died in 1920 and Edgar in 1928) the company officers are: LL Munn Jr, President, BC Trueblood, vice-president, IP Gassman, secretary, and HF Zartman, treasurer. By this time, the Arcade Company consisted of 28 different departments.  The four largest departments are toys, household hardware specialties, molding machines, and cast brass and bronze refrigerator hardware.

1941 – When WWII broke out, manufacturing in the US shifts focus to the war effort.  Arcade follows suit.  They ceases toy production and begin producing armor plating.  1941 is the last year that toys would be produced by Arcade.

1945 – The company is bought out by Rockwell Manufacturing Company of Buffalo, New York. They keep the name “Arcade,” but add “a division of Rockwell Mfg. Co.” Products made at the Arcade plant under Rockwell include refrigerator hardware, molding machines, and Homecraft hobby power tools.

1953 – The factory in Freeport closes its doors for good.

Highlights of the Arcade Line of Toys

1919 – Up to this point, toys remained a very small part of Arcade’s business.  Before 1921, the toy line of Arcade only accounted for about 5% of the company’s revenue. By 1926, the cast iron toy division revenue would nearly equal that of all other products, bringing in almost a million dollars in toys sales.

1920 – Things began to change after IP Gassman comes on board.  The company hit on the idea of making “novelty items” based on company products and their logos.  The first of these promotional toys is produced around 1920 and includes the Red Goose Bank (Red Goose Shoes), a miniature Avery tractor, and the Buster Brown (another children’s shoe company) Jack Set.

1921 –  Arcade officials make a contract with the Yellow Cab Company to license the use of the name Yellow Cab Company and to manufacture and sell a realistic toy version on the Yellow Cab. This is the toy that  changes everything for the company and that would soon change the company’s main focus to toy production.  The decision is made by company executives to take a big chance and make high quality, more expensive toys that would be exact replicas of the real thing. Company executives fear that the public will not be willing to spend a dollar or more for a toy.  Their gamble pays off, though. By making toys that really appeal to children, they create a market that no other company fills.  Their toys fly off the shelves. Soon after the Yellow Cab come more toys modeled after the real thing: the Fordson Tractor ( to appeal to the farm kids), the Andy Gump Car, the Oliver Plow, W. & K. Truck Trailer, and the International Harvester Trucks.  Arcade never wavers from their policy of not skimping on quality or authenticity.  The company spares no expense when they create the pattern (mold) for each new toy. During this time the company adopts the slogan “They Look Real.”

1928 – Arcade introduces a  storybook for kids  featuring characters named the “Tiny Arcadians.” This is a fantasy story of fairy folk who set out to create toys for some children who had none. The Arcadians create toys that are beautiful, fun, and sturdy, which makes all the children happy. The storybook is given out for free to anyone requesting it.

1929 – This year, Arcade introduces a toy that is modeled after the steamboat featured in the film “Showboat.” It is one of only two toy boats ever produced by Arcade (the other is a steamboat bank).  During this year the company also offers a deluxe ten-foot dollhouse complete with electric lights.

1933 – The company designs a line of toys for  Chicago’s  Century of Progress World’s Fair. The line includes five sizes of buses, called “people-movers,” taxis, and Railplane cars that all have the logo “Century of Progress, Chicago, 1933” stenciled on the vehicle’s roofs.

1935 – Arcade receives an order from the Canadian Greyhound Lines for five toy greyhound buses to be presented to the famous Dionne Quintuplet children.  A bus is made for each sister with her name stenciled on the bus roof.  These might be the rarest pieces ever made by Arcade.

1941 – This would be the last year that toys are manufactured by Arcade.  The company ceases production of cast iron toys in order to assist in the war effort.  After the war, things are changing in the manufacturing world.  Aluminum and plastics become the material of choice for toy production. Arcade never produces toys again.

1947 – Arcade company executive, IP Gassman, donates the office collection of toys the Stephenson County Historical Society.  This collection has remained on display to the public ever since.  Today, the collection has grown to over 800 examples of toys which are on permanent exhibit at the museum. 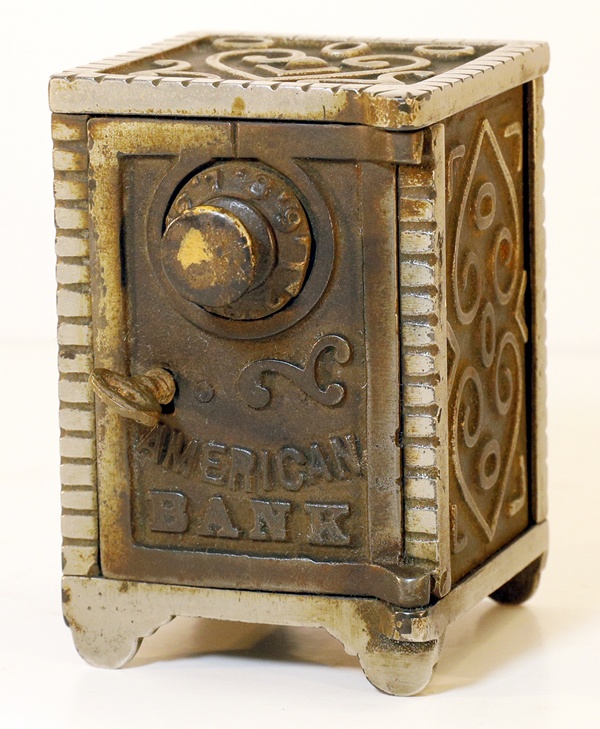 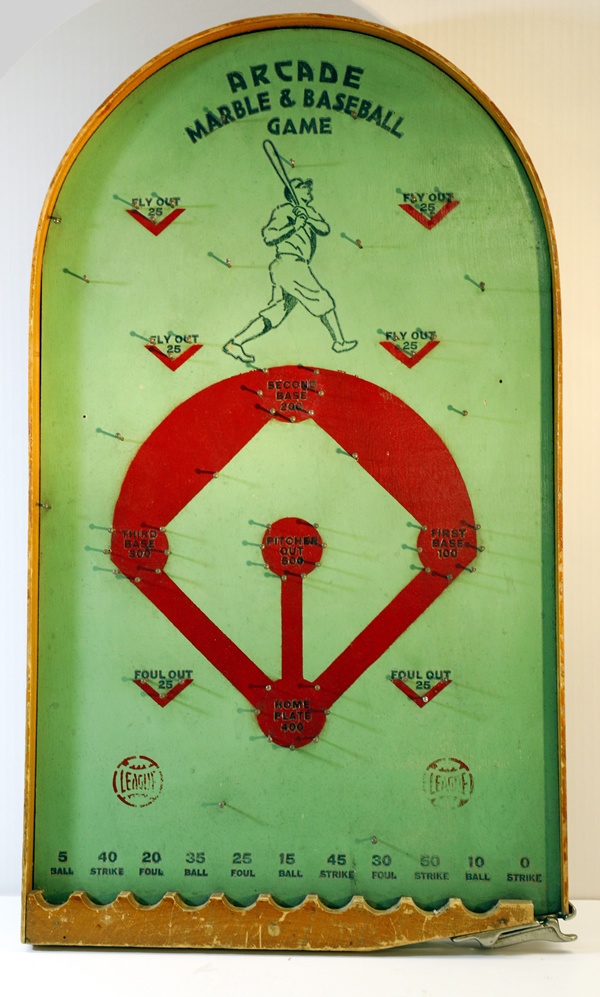