Much of the following information comes from an article written in Spinning Wheel Magazine in 1978.  The author, Ann S. Bland, based the article on an interview with the son of Structo founder, Louis Strohacker.

Freeport native Louis Strohacker ran an early automobile garage in Chicago.  His mechanical knowledge impressed his customers so much that a friend recommended him for a job at Lampson Carrier Co. in Lowell, MA.  While working at Lampson, Louis met a businessman named C.E. Thompson. Strohacker consulted Thompson about an idea he had to start a toy company.

In 1908, the two moved back to Louis Strohacker’s home town of Freeport, IL, where they were joined by  Louis’ uncle, Edward Strohacker. The three men opened a small toy company, called Thompson Manufacturing Company, in Strohacker’s garage on Wright Street.

In 1911, the men incorporated their business and renamed it Structo Manufacturing Company.  It was at this time they  moved operations into a factory building on North Powell Avenue in Freeport.  This modest factory building had originally been the home of the W.T. Rawleigh Company.

The first toys made by Structo were construction kits consisting of nickel-plated steel beams, nuts, and bolts.  They produced about 20 different size sets.  The packaging ranged from cardboard boxes for the lower-end kits, all the way up to walnut boxes for the high-end kits.  In 1923,  the patents for these toys were sold to the A.C. Gilbert Company of New Haven, CT.  The Gilbert Company renamed the toys “Erector Sets.”

By 1918, Louis Strohacker was working on plans to make mechanical, motor-driven toys, and by 1920 he had completed first prototype. The toy never went into production though, because the selling price would have to be at least one dollar,  which was considered way too expensive for anyone to afford.

From 1919 until about 1927, the company manufactured Auto Builder sets, which came with materials and instructions for kids to assemble toy vehicles themselves.

Around 1921, the company began manufacturing toy weaving looms, traded marked Structo Artcraft Looms, using the same pressed steel material as the construction sets.  The line of looms was expanded to include standard weaving looms made of wood construction. During WWII, Eleanor Roosevelt came to Freeport and ordered 125 looms to be used in Veterans hospitals for a therapy program.  She even ended up purchasing one for herself.  The looms were sold for a time through the Sears and Roebuck catalog and J.C Penney catalog.  In 1972, this division was sold to the Dick Blick Company, who continued making them until 1981. They still hold the patents for the Structo Looms.

After selling the construction set patents in 1923, Structo gave its undivided attention to producing a new line of stamped steel toys with clock-spring motors.  After each prototype was made, it was tried out by neighborhood kids before it was put into production.

In 1932, the company stopped making mechanized toys and went into production of stamped steel push toys.  Trucks, steam shovels, vans, and passenger cars were the first four categories of toys made.

In 1935, Structo was sold to J.G. Gokey, who built a large plant just east of Freeport.  The Structo name was kept and the toy line was updated about every two years.  It was at this time also that Structo also began manufacturing license plates.

In 1937, C.E. Thompson retired from the Company, and the collaboration with American Flyer ended.

In 1942, toy production was halted and the company switched over to the manufacturing of water chests for machine guns, bomb racks, and incendiary bomb cases.  The plant also loaded hand grenade fuses.  This continued until 1945, when the company was able to return to making toys.

In 1946, Louis and Edward Strohacker sold their company shares and retired from the business.

Around 1960, the Structo company started producing a line of gas grills.

By 1965, after a series of renovations and additions to the manufacturing plant, Structo was known as the “world’s largest manufacturer of toys under a single roof.” The building footprint hand grown to over 9 acres in size.

In 1973, the last dealer toy catalog was produced, and in 1974 toy production ceased.

In 1975, the patents for all Structo products, except the line of toys, were sold the King-Seely Thermos Company. The company discontinued manufacturing license plates, but turned its focus to the gas grill line, which they continued manufacturing in the Freeport plant.  The toy patents were sold to the Ertl Toy Company of Dyersville, IA, who possibly continued using the Structo name for another year 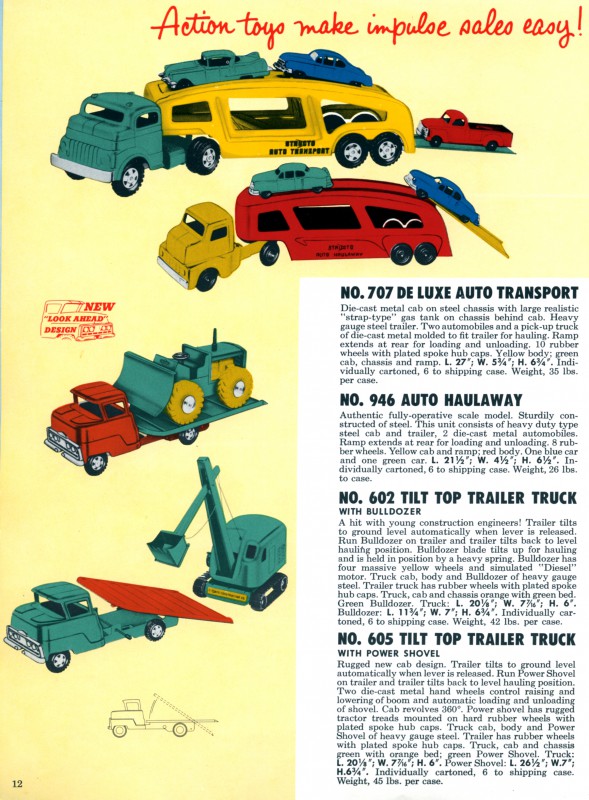